An illuminated plume of water vapor whose color shifts between magenta and pale cyan. The color of the vapor corresponded in real-time to the global sentiment for gold, reflected in the price fluctuation of the commodity. Gold is a peculiar material that derives its value from the social perception of its qualities and collective “moods” toward geopolitical and economic events. Physical gold rarely changes hands but rather serves as the basis for the proliferation of derivatives. Gold’s fluid exchangeability as an untethered material and general equivalent echoes our current social evaporation. The framing structure for Meridian (Gold) was a seating zone that references communal rejuvenation spas and here becomes a site to reflect on the fleeting materiality of contemporary life. 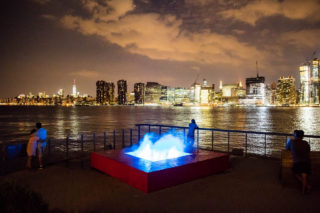 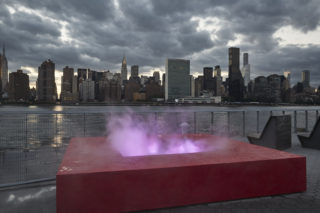